The Ta-Seti Foundation is grounded in the belief that knowledge is a key aspect to gaining power within ourselves and our families, communities, and nations. One of the most important goals within our vision is to partner in support of African-centered thought and African-centered luminaries of diverse disciplines.

In support of the restoration, preservation and protection of manuscripts, archaeological sites, and oral traditions of ancient and traditional global African societies, the Ta-Seti Foundation Incorporated is honored to present our first partnership with historian Runoko Rashidi. 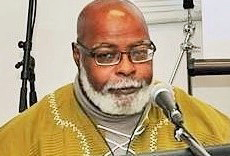 As a traveler and researcher Dr. Rashidi has visited 120 countries.  As a lecturer and presenter, he has spoken in sixty-five countries.

Runoko has worked with and under some of the most distinguished scholars of our generation, including Ivan Van Sertima, John Henrik Clarke, Asa G. Hilliard, Edward Scobie, John G. Jackson, Jan Carew and Yosef ben-Jochannan.

In 2005 Rashidi was awarded an Honorary Doctorate degree by the Amen-Ra Theological Seminary in Los Angeles.

In 1999 he was the major keynote speaker at the International Reunion of the African Family in Latin America in Barlovento, Venezuela.

In August 2010 he was first keynote speaker at the First Global Black Nationalities Conference in Osogbo, Nigeria.

In December 2010 he was President and first speaker at the Diaspora Forum at the FESMAN Conference in Dakar, Senegal.

He is currently pursuing a major work on the African presence in the museums of the world.

Runoko Rashidi’s major mission in life is the uplift of African people, those at home and those abroad.  He is the official Traveling Ambassador for Marcus Garvey’s Universal Negro Improvement Association and African Communities League.

For more information write to Runoko@hotmail.com